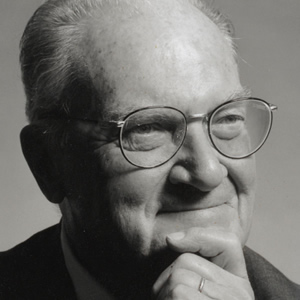 American University of Peace Studies (AUOPS) – A Life Skill Based Educational Institution was founded on the Principles of Dr. Robert Muller.

Robert Muller was born in Belgium in 1923 and raised in the Alsace-Lorraine region in France; he experienced constant political and cultural turmoil during his youth.

Often as a child, Robert Muller would look out of his window at the border he could not cross and long for the day when he, like the birds, the clouds, the sun and the stars, would no longer have to observe the imaginary line. Today, thanks to the dream and effort of his compatriot Robert Schuman who similarly hated these borders, Robert Muller’s passport reads, “European Union” with the sub-title France, and he is free to cross all western European borders.

Robert Muller knew the horrors of World War II, of being a refugee, of Nazi occupation and imprisonment. During the war he was a member of the French Resistance. After the war he returned home and earned a Doctorate in Law from the University of Strasbourg. In 1948 he entered and won an essay contest on how to govern the world, the prize of which was an internship at the newly created United Nations.

Dr. Muller devoted the next 40 years of his life behind the scenes at the United Nations focusing his energies on world peace. He rose through the ranks at the UN to the official position of Assistant-Secretary-General. He has been called the “Philosopher” and “Prophet of Hope” of the United Nations. Robert Muller is a deeply spiritual person. From his vantage point of a top level global states-person, he has seen a strong connection between spirituality and the political/cultural scene.

Robert Muller created a “World Core Curriculum” and is known throughout the world as the “father of global education.” There are 29 Robert Muller schools around the world with more being established each year. The “World Core Curriculum” earned him the UNESCO Peace Education Prize in 1989. Based on this curriculum and his devotion to good causes, Dr. Muller has recently drawn up a “Framework for World Media Coverage” as a public service, as well as a “Framework for Planetary and Cosmic Consciousness” and a “Framework for the Arts and Culture.”

Now in active “retirement,” Dr. Muller is Chancellor of the University for Peace created by the United Nations in demilitarized Costa Rica. He is in great demand to make speeches to educational, environmental, spiritual and political conferences around the world. Dr. Muller concentrates his efforts on promoting greater human understanding and global awareness. He was recently the recipient of the Albert Schweitzer International Prize for the Humanities and the Eleanor Roosevelt Man of Vision Award.

Dr. Muller lives most of the year at his small farm overlooking the University of Peace, on a sacred indigenous hill, Mt. Rasur, from which according to indigenous prophecy, a civilization of peace will extend to the entire world. His traditional Costa Rican house is located just up the hill from the Peace Monument of the University. In addition to his duties at the University, he devotes time to his writings and is an internationally acclaimed, multi-lingual speaker and author of fourteen books published in various languages. He has published his Testament to the UN as well as his plans and dreams for a peaceful, happy world.

At the prompting of many of his friends, admirers and non-governmental organizations Robert Muller was a candidate as a global citizen in 1996 for the post of Secretary General of the United Nations.

The significance and importance of education and visionaries like Dr. Muller whose talents and human commitment help shape and preserve indispensable world organization like the United Nations, is that their initial motivation is rooted in experiencing the traumas and life changing upheavals of the world.

The education thrust being such a personal history in those like Dr. Muller ensures that their concepts of education is not top heavy with academic conceit, and retain a flexible approach, which combined with an open-minded approach to world knowledge, ensures that each academic gains is complemented by a pacifist humane outlook as well.

This is the conceptual and practical approach which the American University of Peace Studies in Georgetown, Guyana — an extension or off-shoot of the University of Peace, founded by the United Nations in demilitarized Costa Rica, and of which Dr. Muller is Chancellor — offers in the life skills and cultural programs today.

How, Where, and Who Established AUOPS

Dr. Robert Muller’s principles inspired some of his close friends working together to establish another Peace University, which was eventually called the American University of Peace Studies.

This group which comprised a Russian professor, two Brazilian Psychologists, a German Professor, four American Educators, including the former Mayor of Ojai California and Dr. Eton Simon – a native of Guyana, worked together to establish the University for Peace & Understanding in Ojai California USA in 1992, which was later changed to American University of Peace Studies.

American University of Peace Studies and the Friends of Peace Pilgrim organization were established in Guyana by Dr. Eton Simon in 2002.

Dr. Eton Simon was born in Guyana. Dr. Simon was quiet and sensitive and liked to spend long hours alone thinking and trying to understand the complexities of life. At the age of 14 he was shocked to learn of the assassination of US President John .F. Kennedy and that event sparked an interest in world affairs and the responsibilities which came with those who controlled the world. He realized that the best way to really find out the answer to questions like this was to travel and experience living with others in their countries. At 19 he left Guyana seeking such enlightenment and traveled to Suriname, French Guiana and then Brazil where he ended up spending years advancing his education in big cities like Rio de Janeiro and Sao Paulo.

He went on to travel to over forty countries conducting educational research on developed and undeveloped countries, and wrote a number of research papers on his findings, which were shared with the American and the British Government.

In 1982, he travelled to Long Beach, California USA, to work for a Micro Conglomerate as a Research Analysis. During his 19 years in the United States he studied Psychology at West Coast University and obtained a Doctorate in Psychology and a doctorate in Philosophy and Metaphysics from the University of Metaphysics.

He then went on to teach at the Yavapai College in Prescott Arizona and lectured at a number of universities including the University of California.

During that period he connected with the group, which came together to form the Peace University.

In 2001, Dr. Eton Simon returned to Guyana and established American University of Peace Studies in 2002 and a Chapter of the Peace Pilgrim Organization, which is run by a number of Guyanese who have done extensive peace initiatives work in Guyana, with the distribution of peace materials, working with children from the Drop- in Center and planting of Peace Poles around Georgetown. American University has conducted extensive Life Skills Training and outreach programs to a Global Population. Contact Us to find out more.